The most amazing and inspiring motions and forms can always be found in nature. By combining different materials and placing them under different circumstances, we can achieve natural patterns and forms that are not only beautiful but also neat and organized. This work was inspired by the Ferrofluid and its reaction to magnet. The liquid used in this work is a mixture of micronized iron oxide particles, oil, and citric acid, which is similar to ferrofluid. It also reacts to magnet, and depending on its distance from the magnet and its strength, it makes different forms that follow the same rule. In “Black Wave” which is an interactive work, humans are also added to this reaction as a third party; they can control the reaction and feel themselves as a part of it.
Exhibition: TADAEX | Dec 2017 | Tehran, Iran
I was always fascinated by natural forms and shapes, the reaction of natural material, their forms, geometric shapes and all the algorithmic patterns. I came across with Ferrofluid when I was thinking about an idea for my new installation. I found its form so appealing. Ferrofluid is well-known for it’s reaction to magnet and its reaction is far more interesting than any other natural reactions that I had ever seen. I decided to make my installation based on this exotic material. I evaluated it’s facilities and capacities and consequently brainstormed for my installation. After that, I had to choose one idea among many. There were some elements that affected my decision such as time limitation ( I wanted to present my installation in Tadaex festival ) , financial constrains, my own abilities and so on. 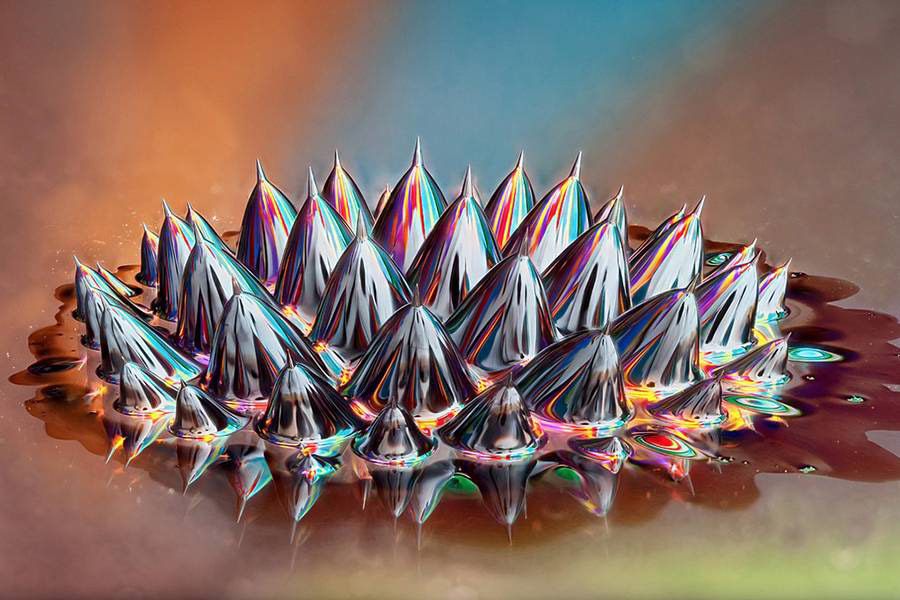 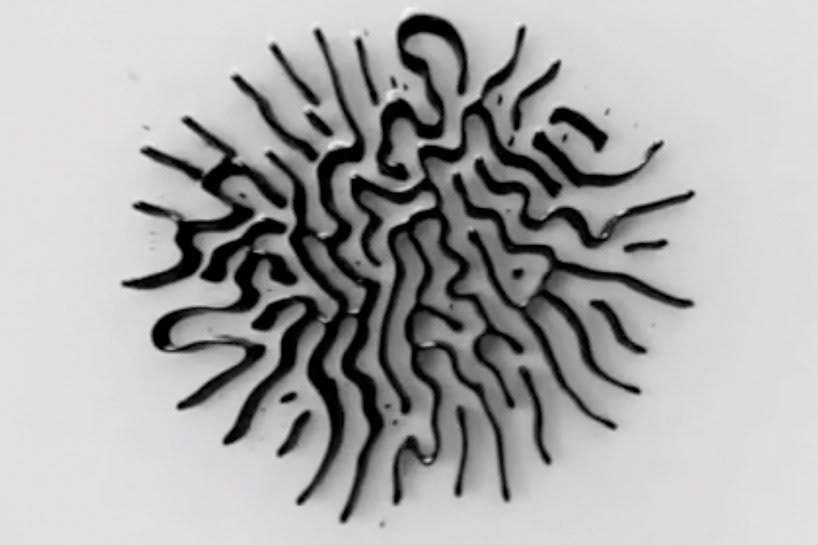 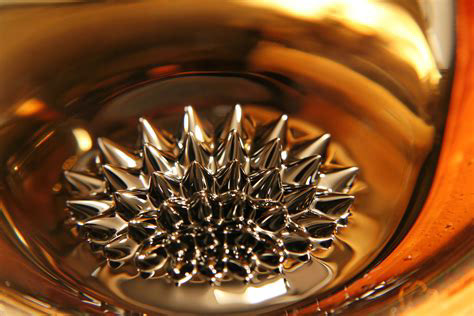 I decided to put human as a third party for this reaction, by controlling the magnet.
I used Leap Motion to get data from human’s hand and use them to move the magnet, then I used processing for transmitting signals from Leap Motion to Arduino. There were two step- per motors in the mechanism, which was moving the magnet in x and y axis. Stepper motors themselves were being moved by the signals transferred from leap motion.
My first challenge was to have access to ferrofluid which couldn’t be found in Iran and was too expensive and beyond my budget to order from another country. So I decided to make it myself. It took me around two months to reach adequate result. there are lots of tutorial on the internet that teach you how to make ferrofluid and I tested almost all of them, but non of them gave me a desirable result.while I was testing different approaches, I also consulted with a chemist and searched a lot about it. At the end I came of with a formula which, although wasn’t exactly the same with the original ferrofluid, it gave me the result that was very close to my ideal and I was so satisfied with the form. I also knew that if I changed one of my substances( using nano iron oxide instead of micronized iron oxide) I could make my ma- terial even closer to the original one but then I had to spend lots of extra money, so I decided not to change that substance. I also thought that my form was in some ways novel and differ- ent.​​​​​​​ 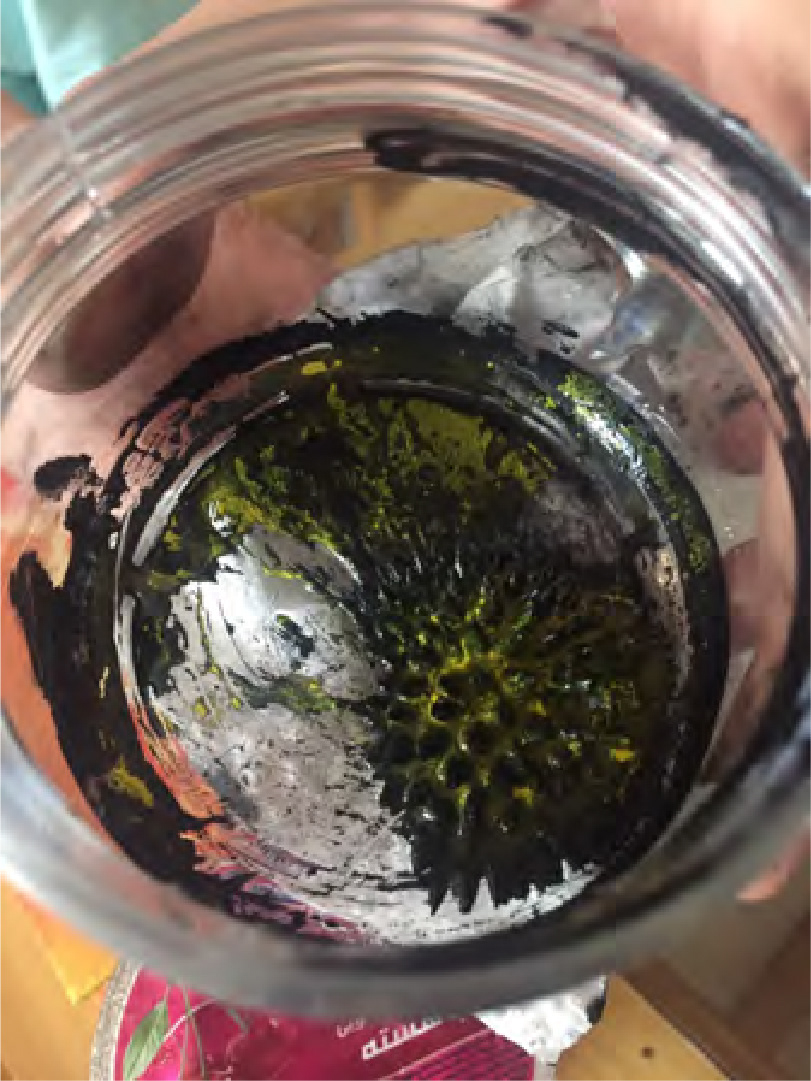 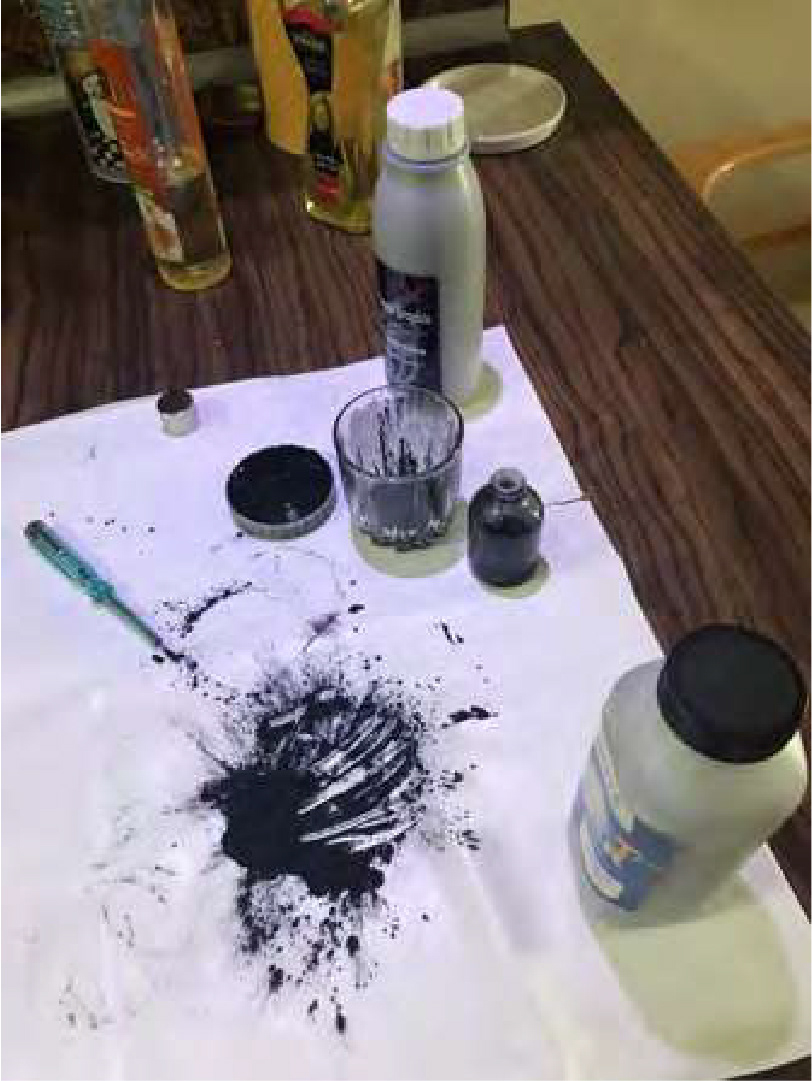 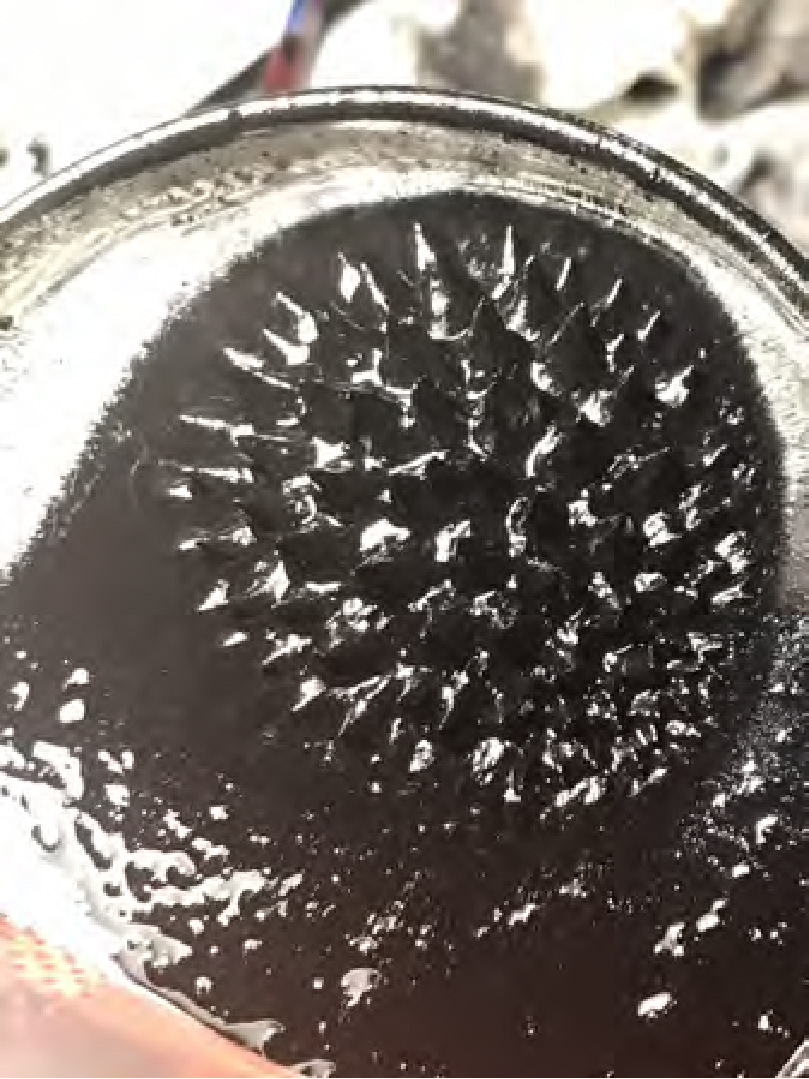 After I was done with the liquid, I had to design the mechanical part which had to move the magnet. The challenge was the weight of the magnet. Most of the designs were not feasible because the magnet was too heavy. Finally, I got some inspiration from the mechanism of lasers and 3D printers and designed something like them to move my magnets in two directions. I had to make all of the mechanical parts from scratch and It took me about one month to make it because in mechanisms like this, it’s so important to be precise and all the connections and sizes must be accurate and even a small displacement could intercept the machine from working properly. 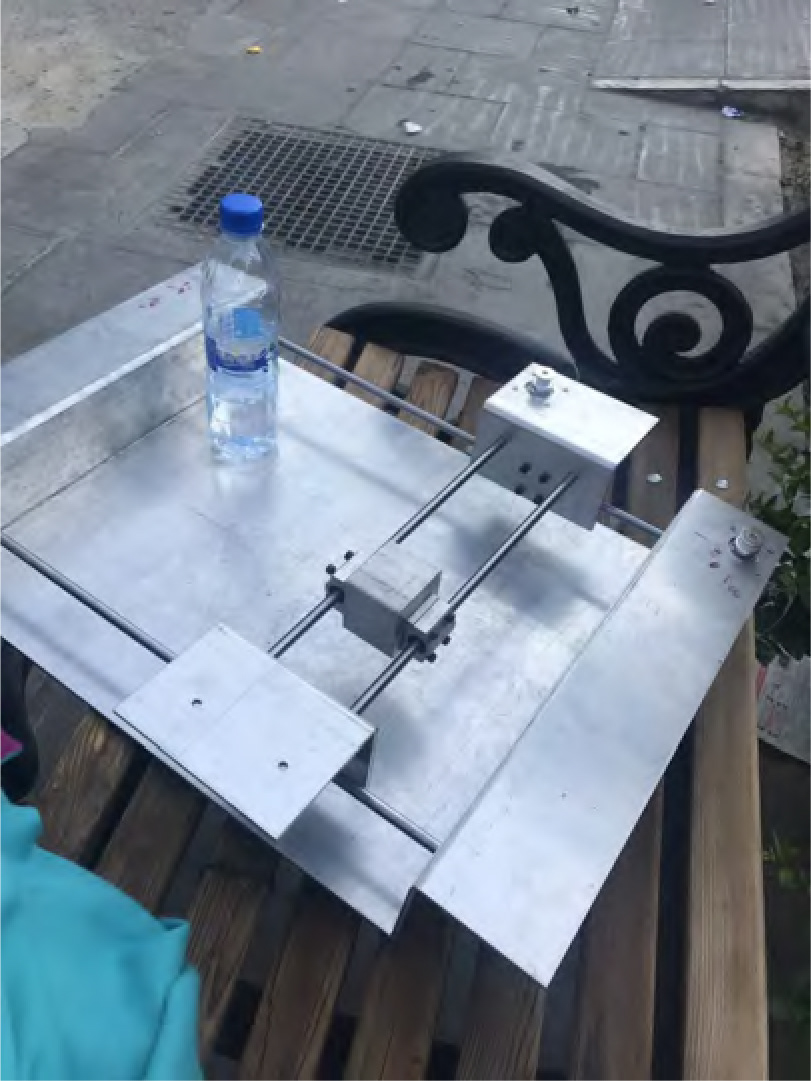 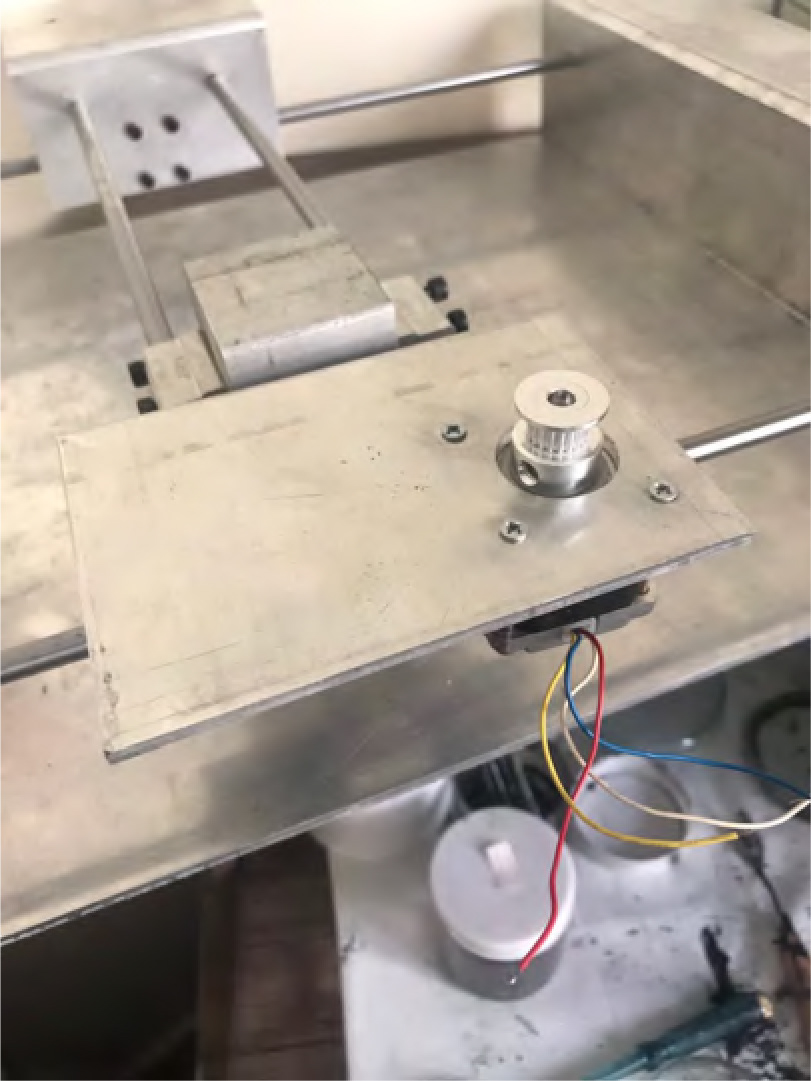 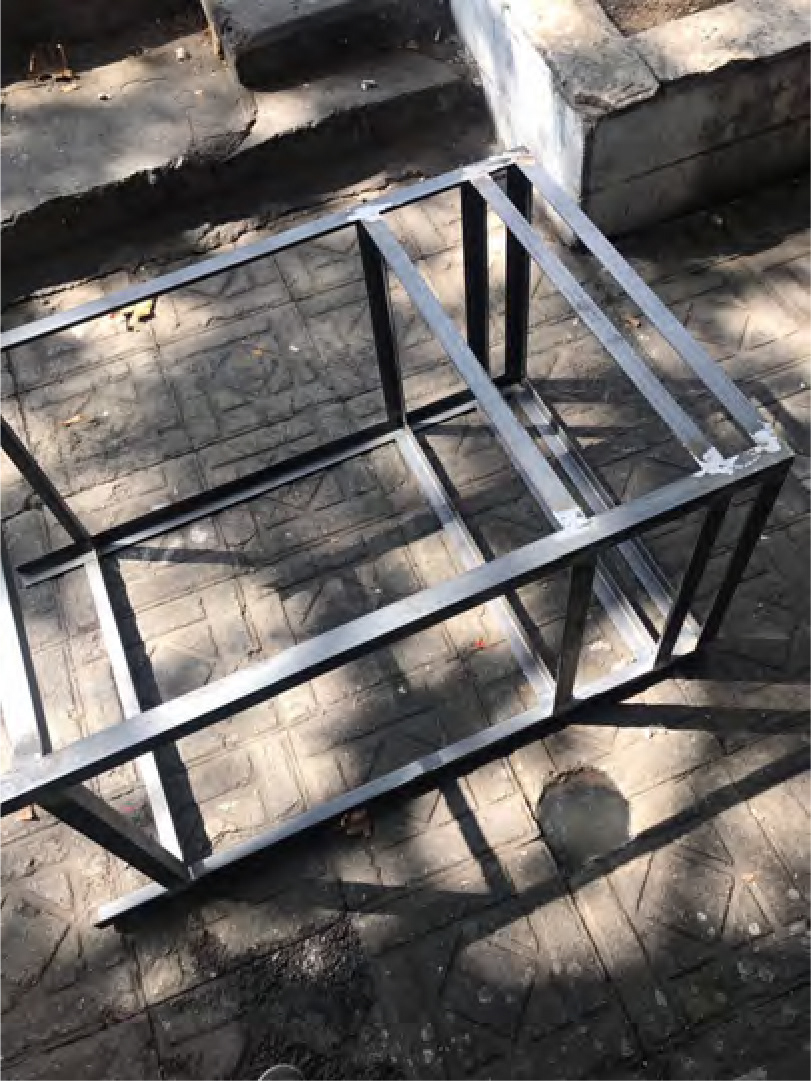 At the end, when almost every part of the machine was done, I encountered the problem that I hadn’t expected. The problem was the speed of the magnet. It was too slow, making it hard for the movement to be noticed. It took me a few weeks to solve this problem because I had to find the root of the problem. At the end, I realized that the problem was in the way the signals were being sent from Leap Motion to Arduino and the most important aspect of the problem was that Arduino couldn’t multi task. I had to reorganize my code and remove any section that could affect my speed, so that I could reach the optimal speed.
I had music for my installation which a sound designer had designed it for me, and it included an ambient sound which was being played in background and some noises that were being played with the movement of the hand on Leap Motion. I had to remove this part for the sake of the speed. At the end, although the speed was slow, it got much better.

The feedbacks I got from people were very interesting. It was more interesting for them than I thought. Some of them perceived it as an alive creature and they told me that it gave them the sense of an alive entity. Many of them wanted to touch the liquid to see what that was. Although that was somehow a scary black liquid, many people easily touched it. This issue made me put a sign near my work to tell people not to touch it. Almost everyone wanted to know what the liquid was and what it was made of and what was moving it. Some of them thought that it was a kind of liquid that responded to the magnetic field but they thought that it was their bodies that were providing the magnetic field. In my installation the mechanical part that was moving the magnet was making some noise and interestingly, it was weird for some people in that they thought that the noise was related to the black liquid inside the container. 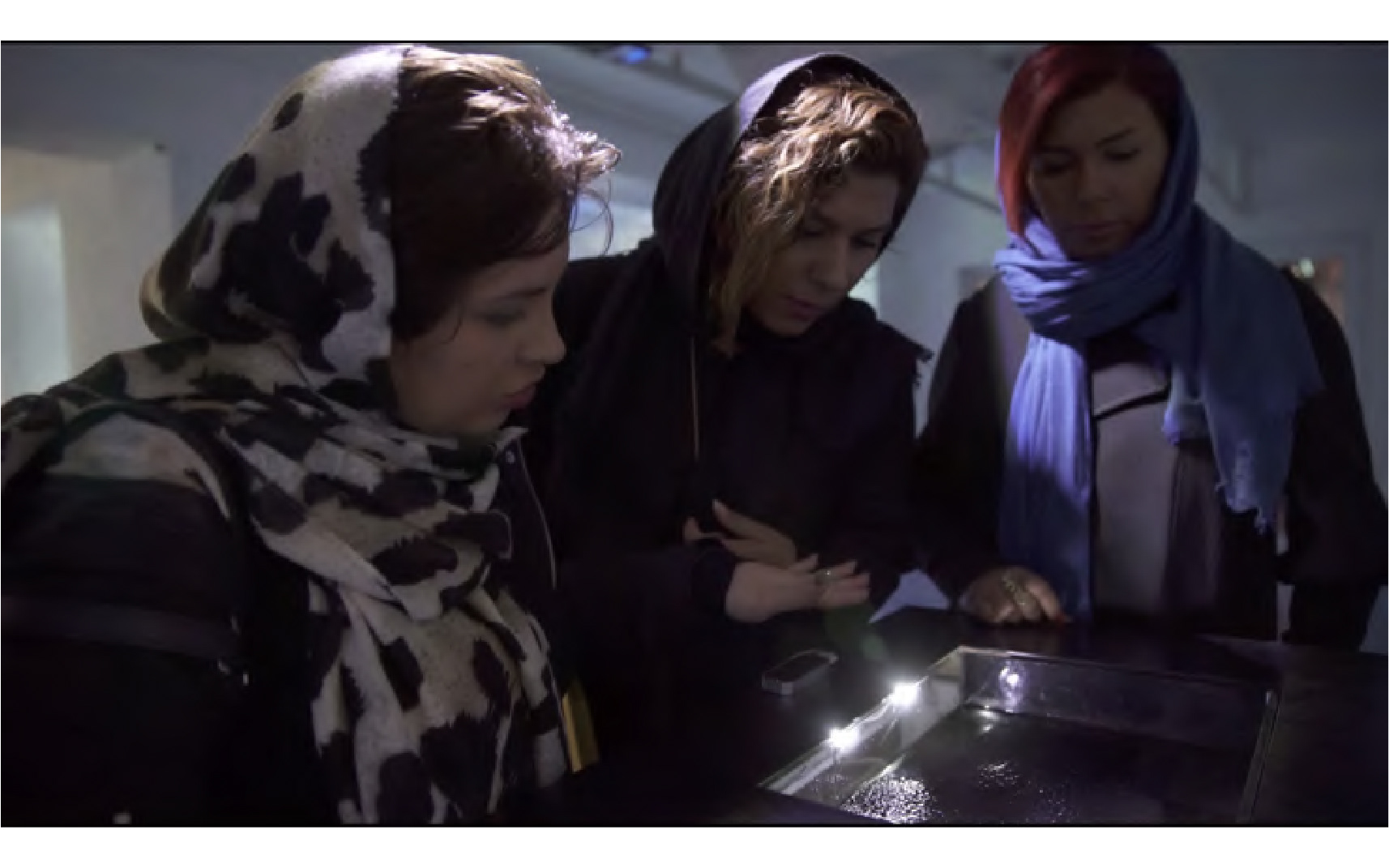 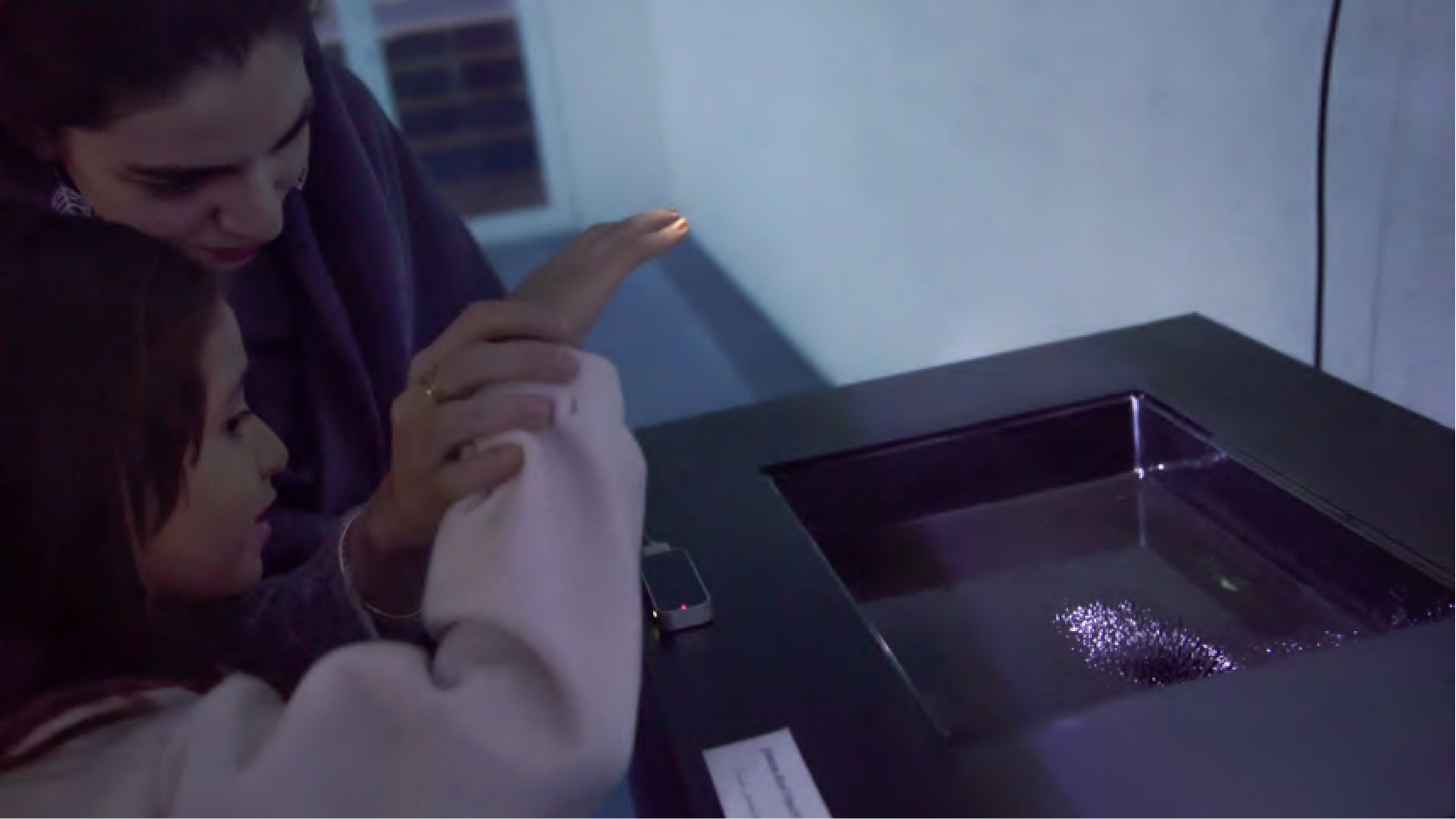 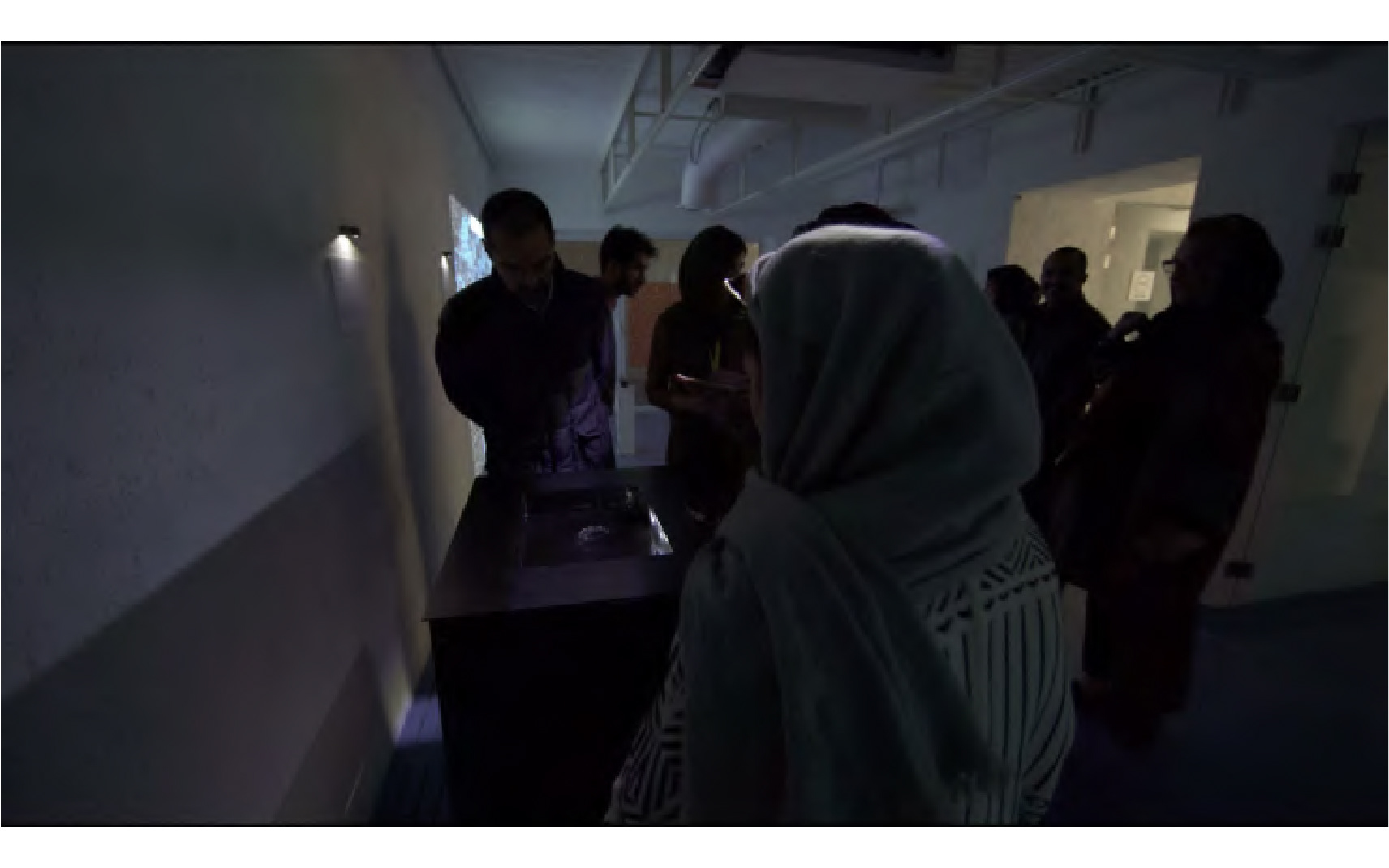 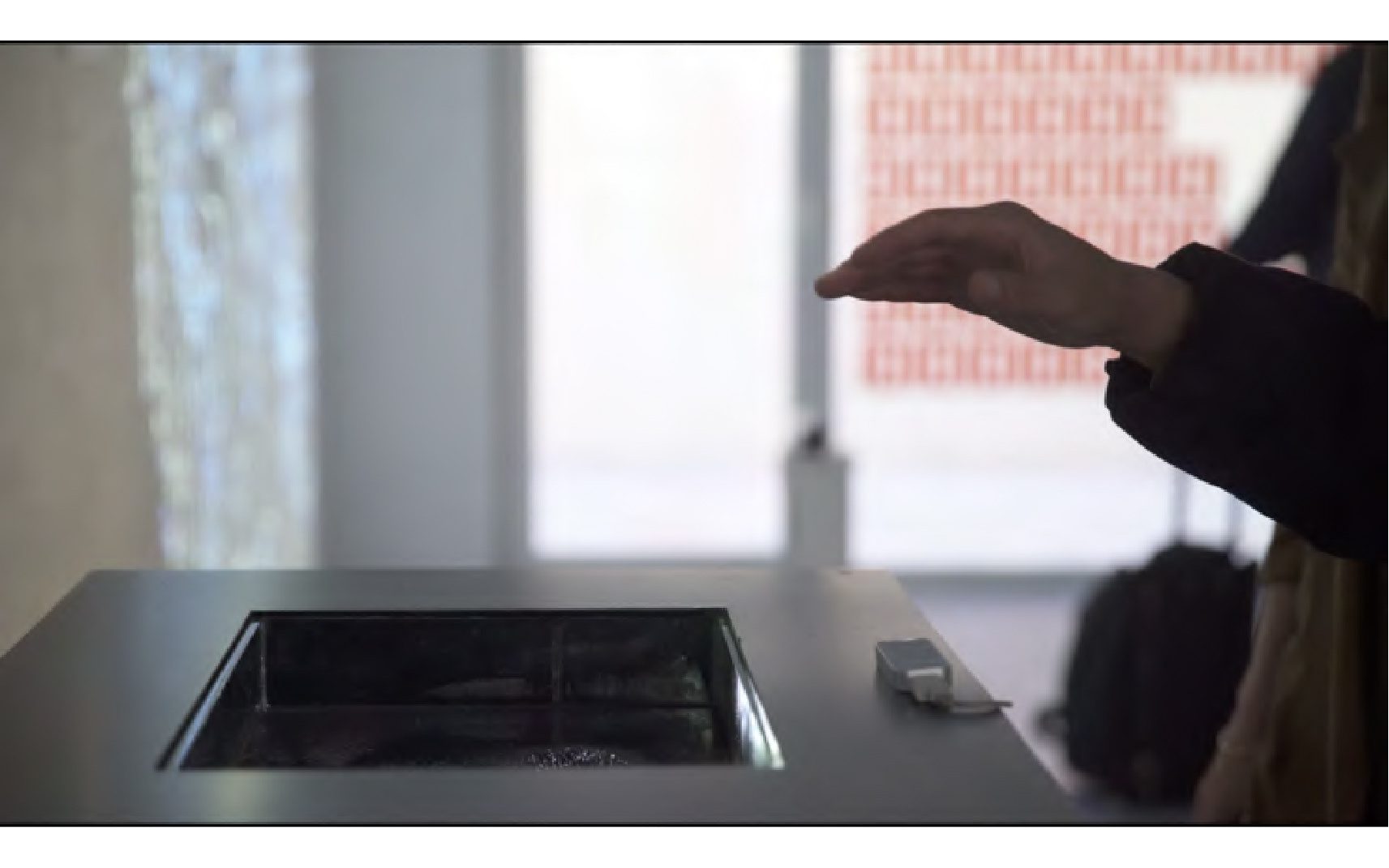 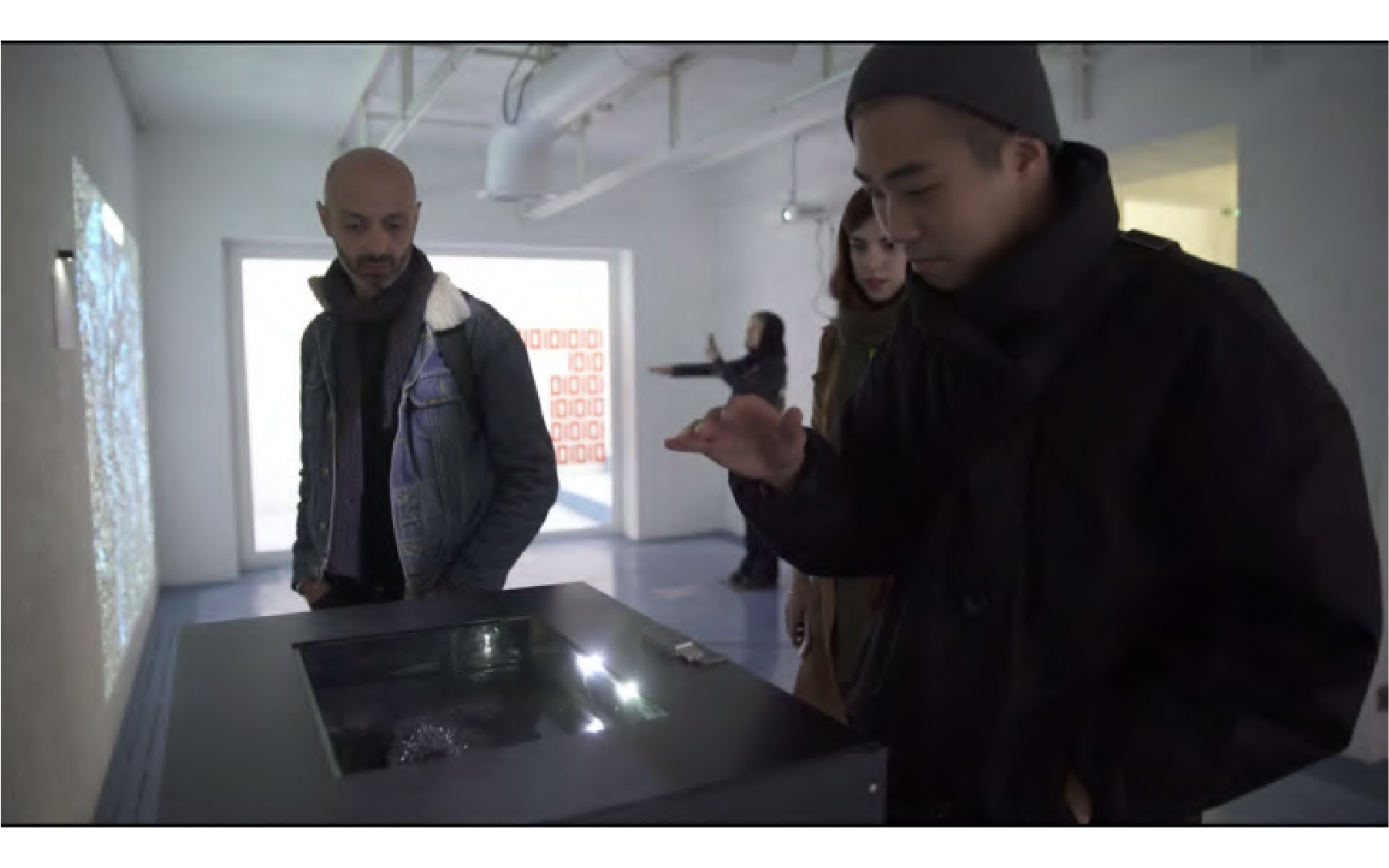